I have passed through Hanoi twice while traveling in Vietnam, staying a total of 11 or 12 days in this beautiful capital city. While here, I’ve had the pleasure of training at BJJ Hanoi at least four or five times. 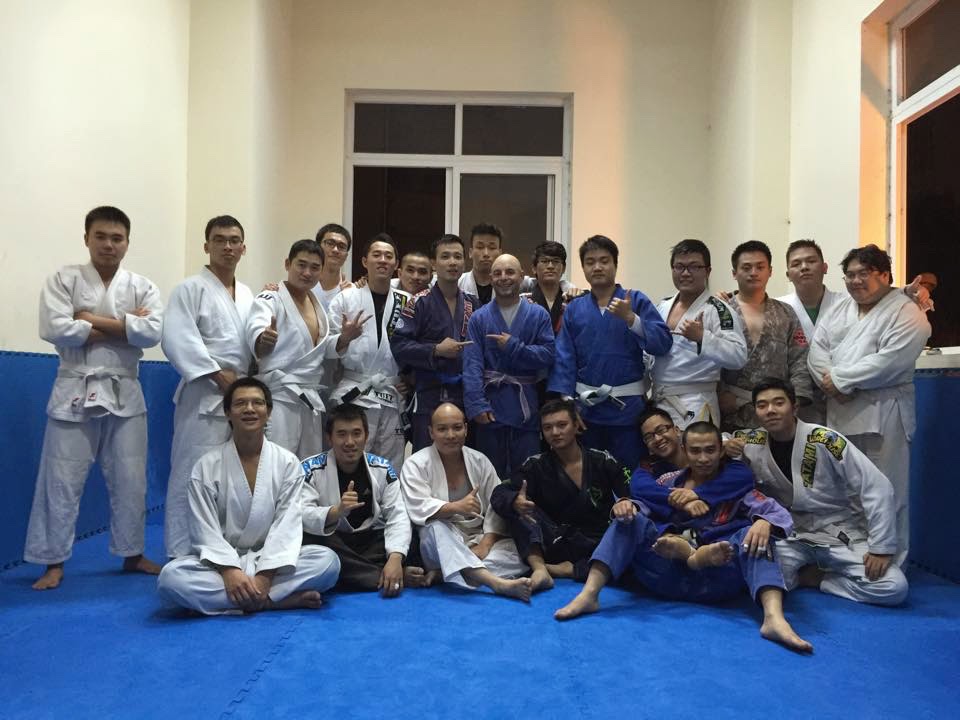 Directions:  Take a taxi from the Old Quarters tourist district, which should cost about $5 to $7 USD. As with all taxi rides in Vietnam, be certain to use a taxi that publishes its meter rate on the door. Some charge as little as 9,000 VND per KM, while others charge as much as 40,000 VND per KM.

Tran Tuan Anh is the head instructor and one of two co-founders of BJJ Hanoi. He is a blue belt and is among the highest ranked BJJ practitioners in the metropolis.  He clearly spends a great deal of time planning each class, and uses the Gracie University curriculum to structure them.

Important note:  he trained BJJ while living in San Francisco and received his blue belt from a legitimate black belt, Stephan Goyne of Bay Jiu Jitsu, not from Gracie University.   In other words, his blue belt is not a GU “technical blue belt”.

Since nearly all students are Vietnamese, he teaches his class in that language.   His teaching style, however, transcends language and he goes into great detail on each technique he shows.  Since he is teaching to white belts, the curriculum focuses on the basic BJJ techniques that form the foundation of a solid BJJ game.

Following the warm-up, Tuan Anh teaches the technique of the day and works with pairs as they drill it.  After the technique portion, there is about 45 minutes for sparring.  Since the room size is limited, only 4 pairs (eight people) can spar at a time.  For this reason, groups often rotate.

At the end of class, everyone circles up for brief announcements, a bow, and shaking hands with training partners.

I have rarely seen a friendlier, more welcoming BJJ gym.  Though my inability to speak Vietnamese was a barrier to communicating with some, at least a third of the guys speak pretty good English. Regardless of language, however, everyone went out of their way to welcome me.

After class, many of the students gather on the sidewalk outside the building for drinks (tea, water, etc).  While friends enjoying a drink on the sidewalk is common in Vietnam, foreigners are not usually invited into the group.  I felt honored to always invited to join in, and it was a great opportunity to get to know them better and learn more about what life is like in Vietnam.

BJJ Hanoi has space in a large martial arts and sports building.  In addition to housing the BJJ Hanoi Club, the building also provides space for those doing karate, ping pong, other martial arts, and weight lifting.

The BJJ Hanoi room itself is relatively small, but Tuan Anh makes the most of the limited space.

I don’t know the cost for visitors, but I think they will likely let you train for free if you’re a colored belt and not an a**hole.

Things to know if you go:

Had a great time at BJJ Hanoi and hope to come back next year to help some of their guys prepare for a tournament.  If I lived in Hanoi, this would definitely be my BJJ home.

From a Purple Belt’s blog : http://bjjblues.blogspot.com/2014/12/school-review-bjj-hanoi.html