Twenty four hours after landing in Saigon I arrived at Snake Pit jiu-jitsu somewhere in the middle of District 7. The original instructor moved back to the United States so I was welcomed by four white belts hungry to learn any technique I was willing to show.  We did a light warm up (I was dripping in sweat before I stepped on the mat due to the heat and humidity) and went straight into technique. I showed a few sweeps from half guard and then jumped into some light rolling. The passion for the sport demonstrated by these four dudes who just wanted to learn, train and roll was phenomenal. 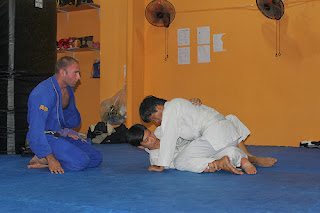 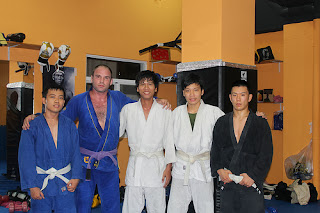 Three weeks later we arrived in Hanoi and I had the privilege of training at two gyms. The first night in Hanoi I visited the House of Laughter gym run by Aaron Gardiner, an Australian national and a purple belt under Chet Quint, a 2nd degree Pedro Sauer Black Belt based in Beijing, China. I was asked to show one of my favorite submissions so I pulled out the clock choke. Again, freaking awesome to be sharing and learning jiu jitsu in Vietnam. House of Laughter was great because I was finally able to get a nice roll with a purple belt!

The following day I met up with an awesome guy named Tran Ahn who runs the longest standing jiu jitsu gym in Hanoi (2.5 years), BJJ Hanoi. While meeting Tran for coffee the conversation immediately shifted to jiu jitsu and tech startups, two of my favorite subjects. For a few moments I had an itch to stay in Hanoi long term…you never know. The same night I went to his gym and again had the opportunity to teach a few techniques and roll with the team. After class we hopped on the back of the guys motorbikes and headed to a local spot for food, drinks and a night out with the locals – BAD ASS. 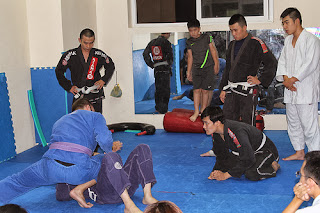 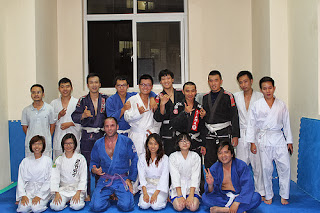 I should mention a few things: 1) everyone who trains jiu jitsu from Saigon to Hanoi knows and loves Kurt Osiander, which is sick! 2) The power of the internet has transcended jiu jitsu across borders where you can now have a gym full of white belts helping and teaching each other techniques – regardless of how well they are performing the move…! 3) Similar to the US, jiu jitsu here is a way of life and a community of brothers so the culture of the sport isn’t lost.